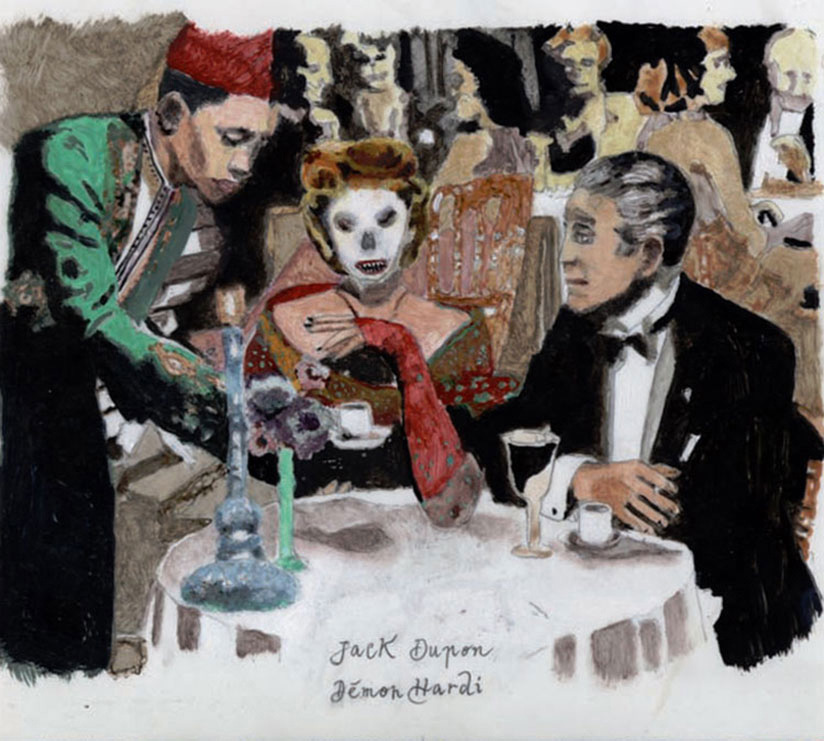 The album was produced and engineered by JackDupon and Brian Sachs and recorded in the United States at Drumlin Downe Studio in East Kingston, NH in September 2010.

The band, Philippe Prebet [v, gt], Arnaud M’Doihoma [b, v], Gregory Polozzi [gt,v] and Thomas Larsen [dr] triumphantly toured the eastern US last summer and is looking to return in the summer of 2011.

All music and lyrics by Jack Dupon

Released by the label MUSEA

Do You know Jack Dupon? No? Don’t worry, neither did I.

Do you need to know Jack Dupon? Hell yes! Let me introduce you to a really nice surprise starting from the point that:

First of all, the digipack of this album is awesome, pictures of Renard IV are like a Tolouse Lautrec nightmare, really incisive and gently scary, a couple is sitting in a coffee-shop, I’d imagine in Morocco, getting a coffee and a narghile (hookah) smoke… the handsome man is smoking and the lady dressed like probably late 20th century, with a skull face… brrrrr… amazing paintings.

Inside the booklet it is hard to understand.  The lyrics are here but the words are fragmented and symbols make the reading hard all of which serves to underline that nothing is easy in this word.  (I’m doing my best trying to understand the context/content of this album but it’s very very difficult, reminding me of James Joyce–on acid!!) I ll publish the review but stay tuned because im going to investigate and ask some questions to the musicians because this is insane (insane in the good way eh!) Conclusion of part I :the product as a mere object is great!

Secondly, the music of Jack Dupon is an aggressive progressive rock, but when I say aggressive I mean that this is THE aggressive progressive rock with a far but constant Zeuhl feeling a la Koenji Yakkei and the RIO feeling a la Etron Fou Leloublan Make no mistake, it’s not MAGMA or a 100% zeuhl album but the way of singing absolutely remind of this style – especially of the Japanese band. Aggressive Zeuhl with King Crimson and Hendrix brewed with SleepyTime Gorilla Museum. The vocals are rough and dirty, more than half of times out of tune (recorded drunk and while smoking eh! :-]).

This said, it’s an album highly recommended to real aggressive and adventurous prog lovers. There is not one but two guitars here for you, one working on the wah-wah magisterially and the other kicking your head with impressive violence and distortion (with violence I don’t mean a “metal” feeling, no metal here) stepping from dirty blues lines from time to time to hard-rock to avant-rock as well. Bass/drums work is always present and traces the progression of melodies leaving the correct/right space to the crazy guitar work, bass/drums move like twins while the two guitars move like stepbrothers who hate each other if I can describe in a silly way even if I don’t mean they don’t play together, they are always together but..im sure you got what I mean. Actually I’m honest, I found it heavy at first listening’s (probably because I’ve been listening a lot of violins and saxes lately..errr) but now after insulting some dozens idiots who should have stayed home instead of taking the highway I feel much better and much more in tune with Jack Dupon’s music. ahhhh!! Jokes apart, music is really powerful, work on tempo and rhythm is massive while guitars are absolutely precise and frenetic at times or totally distorted and liquid in others. Conclusion of part II: check samples and if your collection lacks something hardcore do your best to get it.

Stay tuned for more info in the future. Enjoy! 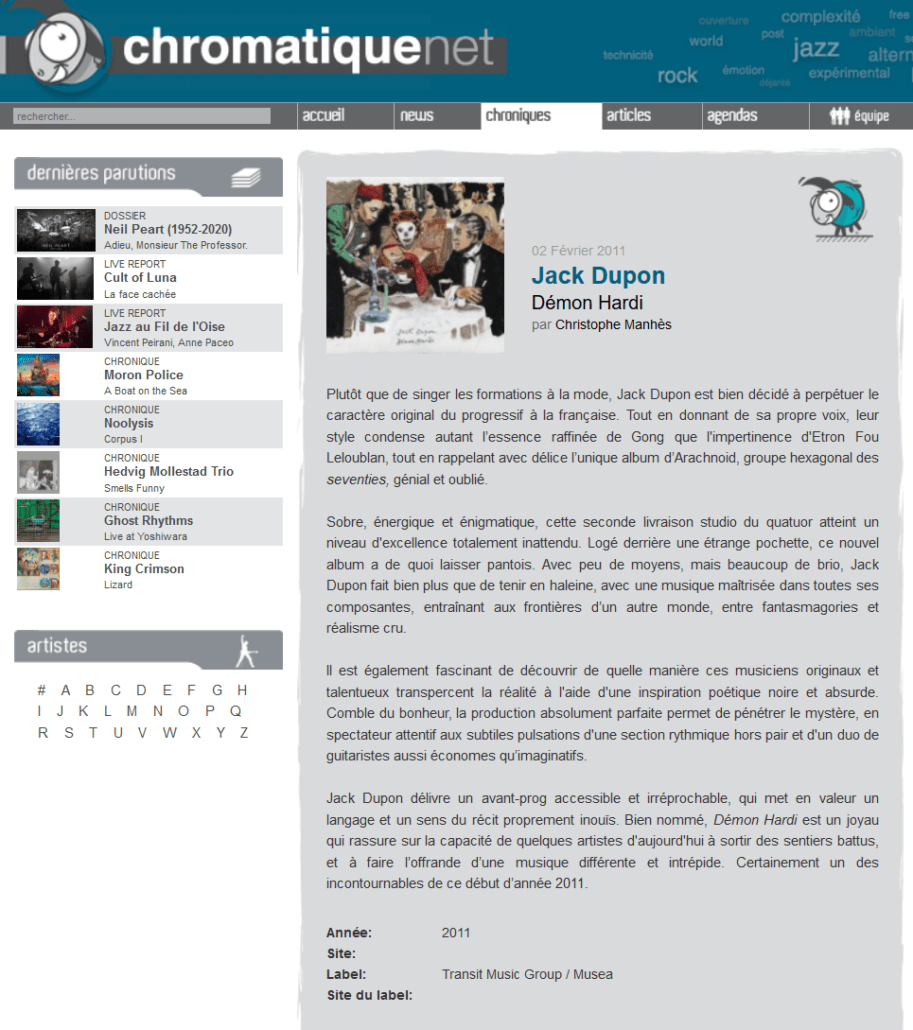 If I could use one word to describe the music of the French band Jack Dupon, it would be ‘strange’. This is avant progressive rock that lends itself well to the RIO movement. The is music is very difficult to describe and is very eclectic so if you are into the avant-garde you should continue reading.