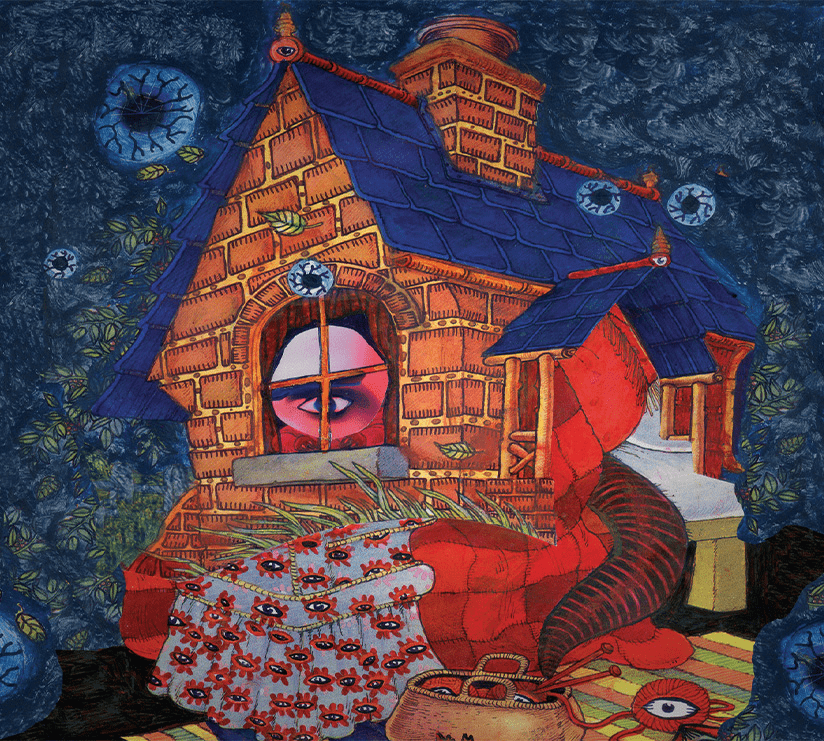 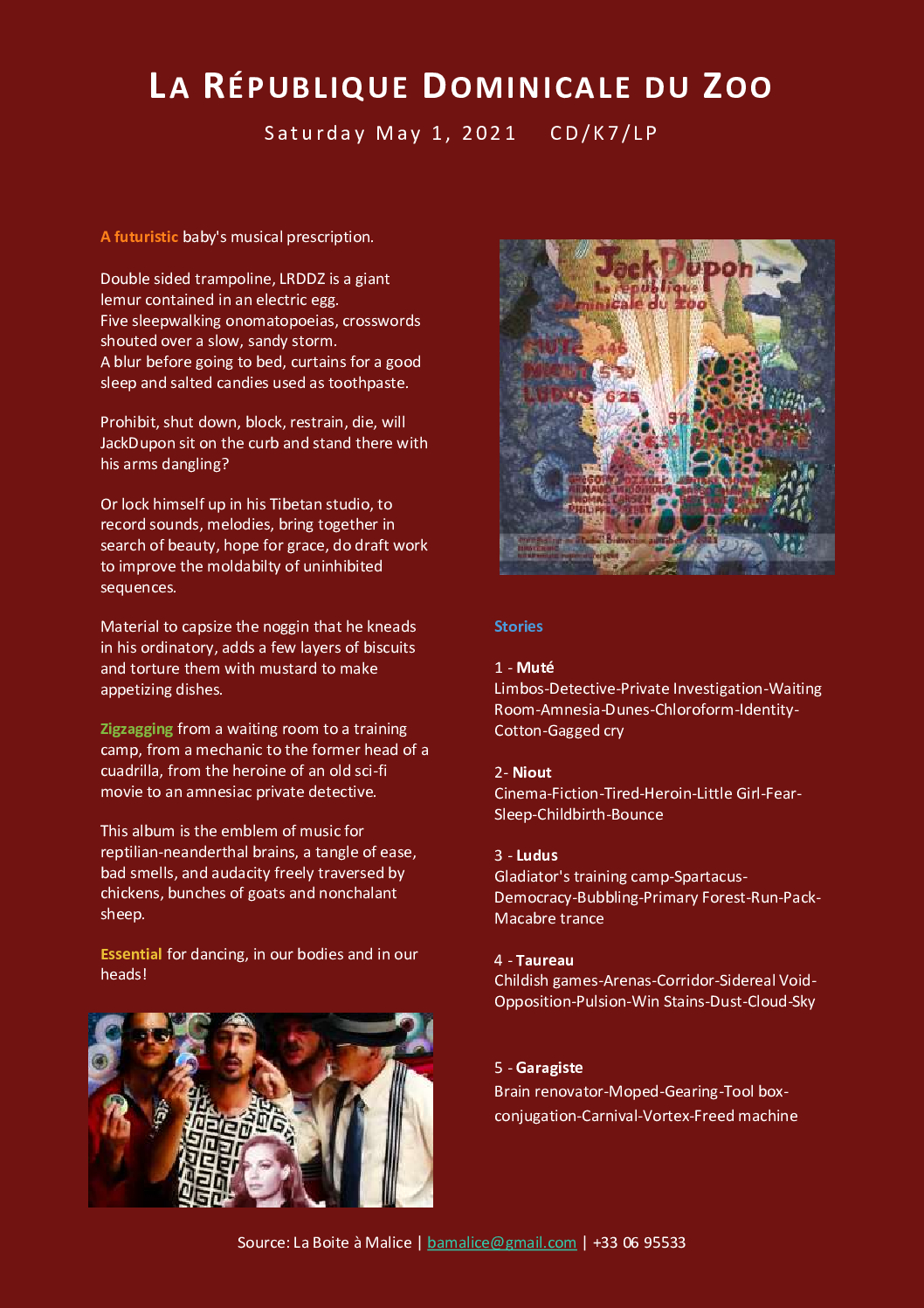 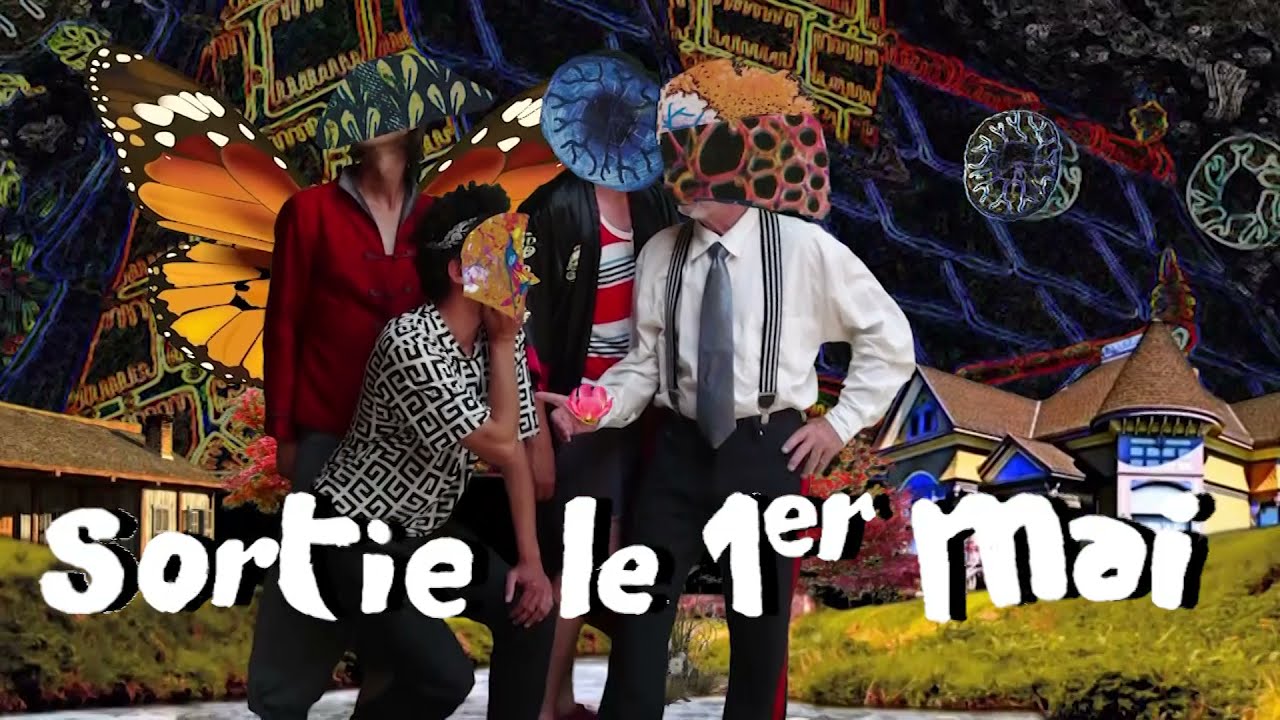 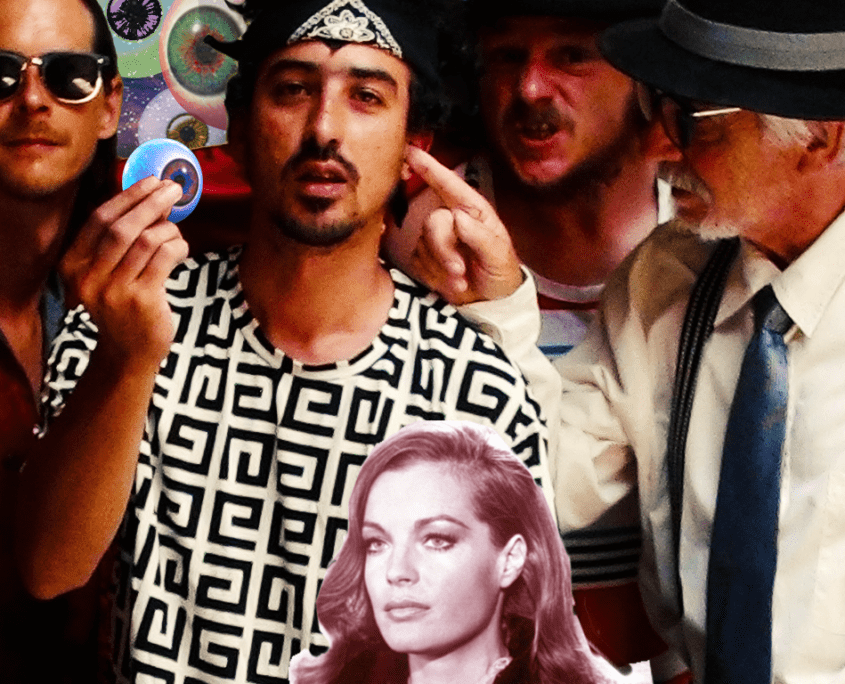 Double sided trampoline, LRDDZ is a giant lemur contained in an electric egg.
Five sleepwalking onomatopoeias, crosswords shouted over a slow, sandy storm.
A blur before going to bed, curtains for a good sleep and salted candies used as toothpaste.

Prohibit, shut down, block, restrain, die, will JackDupon sit on the curb and stand there with his arms dangling?

Or lock himself up in his Tibetan studio, to record sounds, melodies, bring together in search of beauty, hope for grace, do draft work to improve the moldabilty of uninhibited sequences.

Material to capsize the noggin that he kneads in his ordinatory, adds a few layers of biscuits and torture them with mustard to make appetizing dishes.

Zigzagging from a waiting room to a training camp, from a mechanic to the former head of a cuadrilla, from the heroine of an old sci-fi movie to an amnesiac private detective.

This album is the emblem of music for reptilian-neanderthal brains, a tangle of ease, bad smells, and audacity freely traversed by chickens, bunches of goats and nonchalant sheep.

Essential for dancing, in our bodies and in our heads!

–False Journalist : What are your inspirations for this album ?

–JackDupon : These five pieces are little worlds, cycles. And we wanted the bigger picture to be like a map designed to help getting lost in inner turns, in relationships with others.

–FJ : Okay, but is it different from your previous albums?

–JD : It’s the first time that we were composing music for an album before doing it for concerts, it has led us to have both more restraint, for a more intimate listening let’s say, and to try to be more direct, perhaps also more sincere without being able to hide behind the visual pageantry of the live. Also, each piece was conducted by a member of the group, unlike our previous collective compositions, we wanted to use a certain strangeness brought when we compose for an instrument different from ours.

-FJ : What is the cover story?

-JD : We had been working on a cover for some time, without much success, then we discovered this image made by a friend, Céline, with whom we had already worked. The image had not been created for the album, but we immediately found what we were looking for, this slightly disturbing evening atmosphere, this refuge house from which we look outside, the bestiary and the abundance, that was it!

-FJ : A connection with the year 2020, the pandemic and all its changes in this album?

-JD : No relation at all, and all relations at the same time, this is an album to be heard at the present time, its political significance is whatever you give it.

-JD : We make music, it’s vital for us. We’re still working on the 15-years anniversary of the band which has been postponed, postponed and still postponed for over a year, we compose new material and we stand ready to explode life.

-FJ : There is a lot of vocals on this album, sometimes incomprehensible, is it wanted?

-JD : We searched a lot to place this element, the meaning of the texts, its intelligibility. There are no texts in the usual linear sense, rather vignettes put together, or expressions drawn in the toilets of an old night bar. Some words get lost and we ourselves don’t always agree on what we understand and feel, some shouts are swallowed up by the sound. We want a story in which we can travel with your own luggage.

-FJ : After working with several friendly groups for JackDupon’s 15th birthday, weren’t you tempted to add a few guests?

-JD : It was a great experience, in a way they are all there with us, working with as many ways of doing as there are musicians, it gave us the brain to zero on all our habits, we are using this experience taking and distorting what we want from them, in the sounds as in the way of approaching the act. Having said that, we had the ambition of a return to the intimate and fragile, and the best conditions for that were to work solo.

-FJ: Are you guilty?